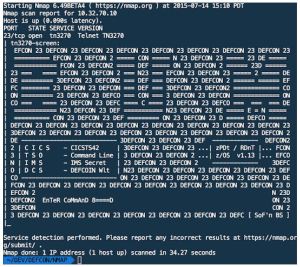 One of the coolest things I got to learn about this past August at Hacker Summer Camp was this: How to Hack a Mainframe.  That’s just crazy, right?  Isn’t everything Windows and Unix and OS X?  Who uses mainframes? Ahh – well that’s where things get interesting.

The talks were served up like a one-two punch. The first was “The Internet of Mainframes”, given by Phil Young, aka Soldier of Fortran, at the Underground track at BSidesLV.  That carried over and was expanded on at DefCon by Phil and Chad Rikansrud, aka Bigendian Smalls, in their joint talk “Security Necromancy – Further Adventures in Mainframe Hacking”.  Both of these guys work with major financial institutions and their job is protecting all that money.  So they really, really, know their stuff when it comes to the mainframe world. They also just happen to be hackers. Having cut my tech teeth in a mainframe shop I can tell you it is a world unto itself, pretty much sequestered from the fun and games on the internet. Or so you would think. But hackers like to ask “what if” and “how do I”.  And that’s where our story begins. Cue Slideshow!

1 thought on “Hack All the Things – Including Mainframes ?!”